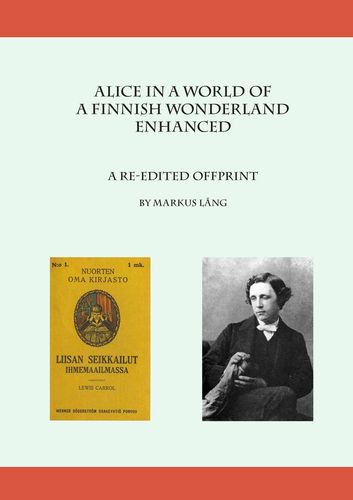 Alice in a World of a Finnish Wonderland Enhanced

Lue lisää
Kuvaus
Lewis Carroll’s classic novel Alice’s Adventures in Wonderland was published 150 years ago and the first Finnish translation appeared 109 years ago. Today, in 2015, the novel is translated into 174 languages. To celebrate the novel, all the translations and the scholarly research of them, especially the pioneering work by Warren Weaver, linguists from all over the world joined their forces and collaborated in a three-volume compendium published in the United States: Alice in a World of Wonderlands: The Translations of Lewis Carroll’s Masterpiece.

This offprint includes the Finnish contributions by Dr. Markus Lång to that voluminous study in a re-edited and illustrated form: the essay “How Alice’s Wits Attained Finnish,” the back-translations along with the Finnish texts from 1906 and 1995, and a bibliography of Finnish Alice translations encompassing the years 1906–2014, as complete as possible. This installment also has a preface and an afterword specifically written for it.
Kirjailija