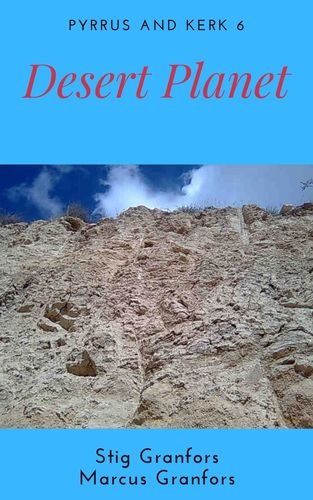 Lue lisää
Kuvaus
The colony members of Death Planet are forced to make an emergency landing on Desert Planet in the Andromeda Galaxy on their way home from captivity. They encounter a mysterious cult led by a manipulative Master. Despite the cordial reception, Pyrrus and Kerk become suspicious. After a while the true nature of the cult is revealed. It results in a bloody conflict, where each step brings the two adventurers and their comrades closer to the brink of destruction. The struggle for survival comes at a high price.
The sixth novel about the space adventurers Pyrrus and Kerk, whose motto is 'It will get better'.

"A tribute to Harry Harrison and his Stainless Steel Rat."

"The only thing he saw was sand.
Nothing but sand.
The mountains on the horizon shone in the last sunlight. Darkness fell and their steps became slower and shorter. But they forgot their aching muscles and the pain in their feet. They walked without thinking, one foot in front of the other.
Forward.
One more step.
And one more.
It was a painful journey without end."

"The female guard came closer. Julia saw her chance. She swung quickly, threw herself on her back and kicked upwards with her feet. She herself was amazed at how smoothly she reacted. All the frustration and anger that had filled her throughout the long journey resulted in this powerful kick. Her feet flew up and hit the target.
She hit the guard in the stomach and the guard collapsed in surprise. The guard lost her grip on her cane. Julia kicked once more. This time she hit the guard in the head. The woman flew over the cliff edge with a surprised scream. The shout continued all the way down to the bottom of the ravine.
There it was suddenly cut off.
As if you turned off a speaker."
Kirjailija