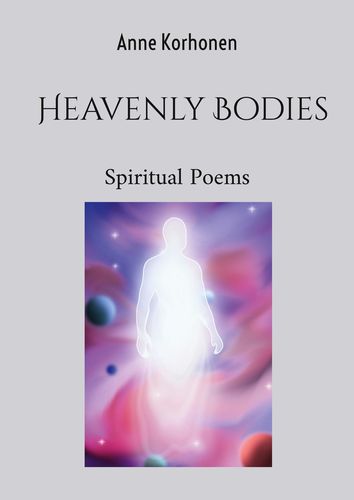 Lue lisää
Kuvaus
Heavenly Bodies is a compilation of Christian and spiritual poetry. The book describes different views on religion, philosophy and faith carrying within itself an idea of universal God who appears in as many forms and images as there are people of different backgrounds worldwide. It completely erases the phrase "holier than thou" from its vocabulary. Loyal to the concept the poems appear in different forms as well ranging from haiku, lyrical and free verse.

The title poem itself, "Heavenly Bodies", is an all-inclusive mantra and affirmation for spirits in all shapes, sizes, genders and colors. It serves as a soft reminder that we are all heavenly bodies and images of God and above all, spirits. "Heavenly Bodies" was released as a spoken word track on Soundcloud by the author.
Kirjailija

Anne Korhonen also known as Eyeslikeblues is a Finnish copywriter, poet and spoken word artist. Her first bilingual book "Sointujen Sateenkaari" (2013) is available by the publisher in Finnish bookstores. Her sophomore English poetry book "Poems Of Universal Love" (2017) is available by the publisher in the Amazon for international readers. Her favorite subjects to write about encompass political and spiritual themes. She is about to tap into a new territory in humour. Eyeslikeblues' spoken word can be heard on Youtube, Tiktok and Soundcloud.