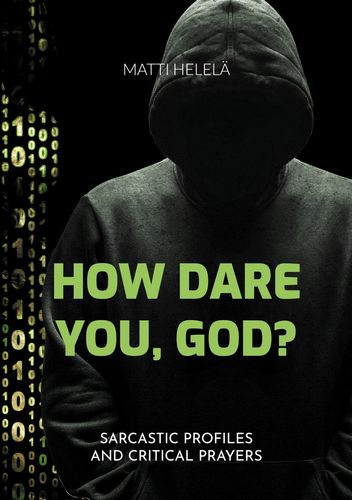 How Dare You, God?

Lue lisää
Kuvaus
I use SARCASM and humor to discuss Christianity and the Bible.

First, imaginary experts describe the divine brand, each
from their own perspective.

Second, imaginary people introduce themselves and reveal their
thoughts without any sugar-coating:

The HEROES OF FAITH are struggling with their problems and trying to do their best to follow their god's will according to their own interpretations.
The CHALLENGERS OF FAITH are wondering about god's intentions, and they eventually break free from the yoke of faith.

Third, the prayers are also divided into two groups. In each group, people talk to god with hilarious boldness and radical conclusions:

The FAITHFUL FANATICS are trying to pray humbly, even though they do not always understand the purposes of their god.
The CRITICAL DOUBTERS present harsh criticism against god.

"This is excellent, absolutely hilarious text. I read it nonstop and was howling with laughter alone here at night. Probably I woke up the neighbors. You have certainly surpassed yourself with this work."

"The book proceeds logically in content and structure. The work is like the growth story of a cautious questioner into a categorically arguing religious critic."
Kirjailija