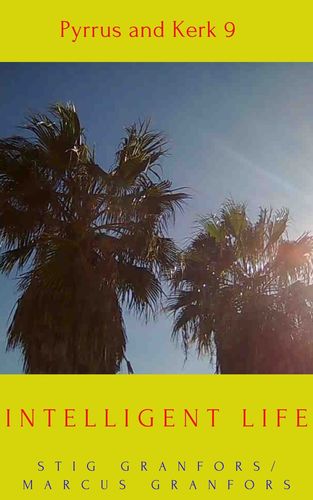 Lue lisää
Kuvaus
Mysterious radio signals reach Death Planet. The message is obviously intelligent even if the signals are difficult to decipher. The signals come from one of the outermost planets in the Andromeda Galaxy. Is it an attempt to contact another intelligent life, the humans in the galaxy? Pyrrus and Kerk set out to explore the mystery. They find something that puts their lives in danger. The future of all mankind is at stake. The alien intelligences on Pyrrus' and Kerk's home planet Neodymium play a crucial role in the final fight against the dangerous beings.
The ninth book about the space adventurers Pyrrus and Kerk, whose motto is 't will get better'.

'Schuu looked more like a small lion than a dog, Julia thought. She played with the lion every day. Despite its lion-like features, the animal was cautious and always in a playful mood. But if something didn't go the way Schuu wanted, he would stop and growl softly. But the animal never attacked and showed no teeth. Schuu immediately became everyone's favourite in the camp.'


"I agree," Daphne said. "We know that during evolution the species that possess this ability to work together have won the struggle for existence, while those that possess only the power of selection have lost or will lose. The same applies to the species that put knowledge first." Daphne coughed lightly. "We still know very little about the function of the brain. But it seems to have a structure that is basically the same as for the rest of the world. Also, in the brain there are systems, which at their core have a source with a messy, chaos-like potential and around it a separate system with a structured character. It's like our solar system with the planets. The same structure also occurs in atoms with a nucleus and electrons orbiting the nucleus."
Kirjailija