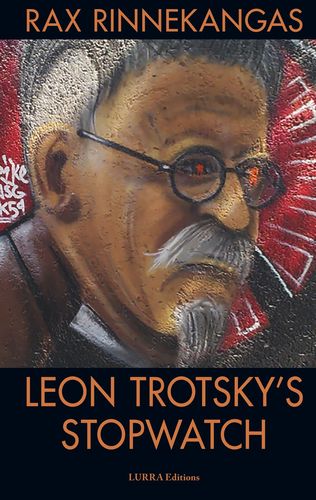 A Nordic filmmaker arrives in the city to make a documentary about a major architectural landmark - Luis Barragán's Casa Estudio house.

He meets a Mexican woman who opens a totally new door into the world of the Russian Jewish ex-communist leader Leon Trotsky, who was murdered in Mexico in August 1940.

The encounter sends the filmmaker on an extraordinary journey into an entirely new aspect of the most mistreated political figure
of the 20th century and his philosophy.

The novel is also an exceptional love story set in an era when the concept of time has lost its original meaning and climate change is just an unpleasant possibility.
Kirjailija

Rax Rinnekangas is an author and film director. His most recent works include Mestarin viimeinen toivomus (Masters last wish, 2019), an essay of reading three times The Brothers Karamazov of Dostoevsky in a monastery, and Nocturama: Se­­­­­baldia lukiessa (Nocturama: Read­ing Sebald, 2013), an account of experiencing the literature of W.G. Sebald and the works of Peter Handke, Thomas Bernhard, and Imre Kertész, authors of the same spiritual circle. In his art films, Rinnekangas has examined architecture, visual art, and social themes. Two North(s) & a little part of anywhere, a collection of his six feature films with the music scores by Pascal Gaigne, a French-Spanish composer, was published in 2018 and is distributed by Quartet Records (Spain), one of the world's leading publishers of the cinema music. American streaming service Kanopy distributes his architecture films. He has published photographic works on subjects such as Europeanism and the Holocaust and had 60 private exhibitions in various countries (Museo Nacional Centro de Arte Reina Sofia in Madrid, 2003, Centro de la Imagen in Mexico City, 2007). His literary works have been published in France, Germany, and Spain: La lune s'enfuit, Editions Phébus, France, 2011; Le juif égaré, Editions Phébus, France, 2013; Der Mond flieht, Graf Verlag, Germany, 2014; La Partida, El Desvelo Ediciones, Spain, 2010; La Luna se escapa, El Aleph Editores, 2012; Adana, El Desvelo Ediciones, Spain, 2019. His works have received numerous awards, including the Finnish State Prize for Literature, the Finnish State Prize for Photographic Art, the Honoured Jury Prize of the International Festival of Films on Art (FIFA), Montreal, the Alex North Prize, Spain. Leon Trotsky's Stopwatch describes the evolution of the most misunderstood great figure of the early 20th century and portrays the Jewish politician, philosopher, and advocate for world-wide equality who was assassinated in Mexico in 1940 with a different aura than the one the early Stalinist world wanted to give him. It's also a different love story at a time when the concept of time has lost its original meaning.