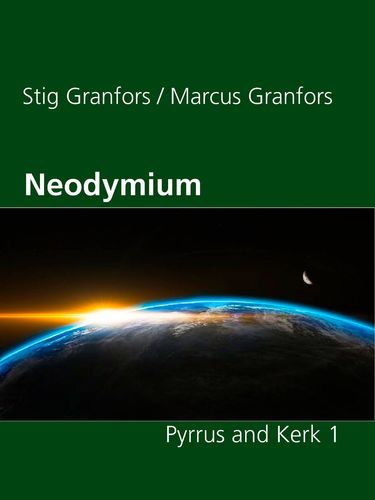 Lue lisää
Kuvaus
Neodymium, the rare metal on the planet with the same name, is sought after. Not only on Earth but also by the cruel pirates who cross the universe in their merciless pursuit of prey. In addition they have found out the well-kept secret of the space colony. The small colony on Neodymium is attacked and the survivors escape into the wilderness and further into the jungle. One of them hides on the dark side of the planet, where he gets help in an unexpected way. Thus starts a ruthless battle over the dominion of the planet.
This is the first novel about the space adventurers Pyrrus and Kerk, whose motto is: 'It will get better.'


'It was a dwarf planet in the middle of the Andromeda Galaxy. Neodymium. An insignificant planet if it had not been for the riches. Neodymium was only one of many similar celestial bodies in the broad belt of habitable planets.'


'A tribute to Harry Harrison and his Stainless Steel Rat.'
Kirjailija

Stig Granfors has published several suspense, adventure and science fiction novels in Swedish. Among the works there are also books about man's ancient and contemporary mysteries, the future depiction of life, riddles in the light of ancient myths and creation legends together with biological mysteries of life and the universe.

All novels in the series will also be published in English. His son Mathias Granfors assists with the English translations.

Marcus Granfors works at a library in Helsinki, Finland and studies. This is the first time father and son has teamed up to write an epic science fiction adventure series of ten books about the space travellers Pyrrus and Kerk. The first book in the series is called Neodymium - Pyrrus and Kerk 1 (2020). The following books will be published in English and in Swedish 2020-2024. His older brother Mathias Granfors assists with the English translations.