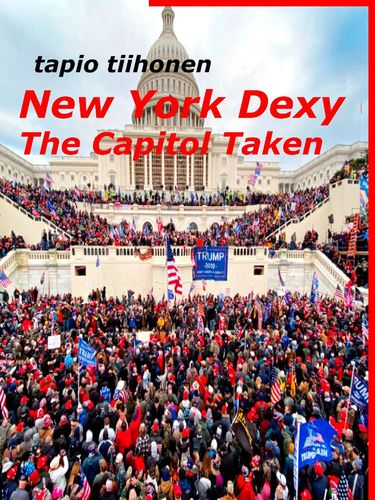 Lue lisää
Kuvaus
The thriller continues. The pandemic is its worst and our business goes from Europe back to the states. The peak is the conquering the Capitol. The tension is immense and the text is written in spontaneous form, so nothing is added afterward. So ideas, opinions, and reflexes are fresh. There are no excuses.
I wished so that festival shall be on the crossroad of Center République, Koenigshofen, Montagne-Verte, Meinau, Neudorf, Schluthfield, Port du Rhin, but the only performance happens in Luxembourg. We jump on the stage. Layin´ on da Bryan? Well, if Jay-Z, Memphis Bleek, Beanie Sigel, Amil, Cam´Ron, and Kanye West have signed to Roc-a-Fella, surely, we can do this. Meanwhile, the BEA-numbers go record high in the U.S., and opening country feeds the virus. The U.S. presidential election and the pandemic take all the attention, and at the same time, the brand new 5-G world´s tech is melting everywhere. Our love story, business deals, straight gunrunners actions, the pandemics waves, political play, huge gatherings in the U.S., come together and everything goes to the peak of the storm. The wireless cloud system, political trash, our Rikers Island gig, Trump´s moves among stock market benefits, huge virus case, and death numbers, good market news, everything goes to the Grande Finale. And there comes the day when hundreds of thousands of people gather in Washington D.C. And ... on Capitol Hill, one police officer made a wrong move. He said to one Arkansas someone who wore clothes from Dixie Outfitters, had Confederate Battle Flag on everything, and generally destroys our heritage: "Hey, you, how cool are you?" And the answer was, before history was made: "Pretty eff´n cool dudie." It is very hard to come out of that chaotic swamp, but still"you are from the Bronx, and yesterday´s inauguration noice stars Jennifer Lopez is from the Bronx, and Lady Gaga from Upper East Side (of Manhatt), so, there is nothing what we, near, deep Brklners cannot do".
Kirjailija

Ph.D. Tapio Tiihonen has written nonfiction books and novels. And with his Muse, Victoria June, he ends the thriller trilogy which concerns life in NYC and Asia and Europe in the great pandemic session. He is his firm´s CEO and also author, so as a Ph.D. he links data with the opinion, news with drama and plays it out the reality-life way and gives the reader a tension. The idea is multinational. "And V cut me some slack, and it was a happy Everclear roulette without five dollars", says the smiling Author.