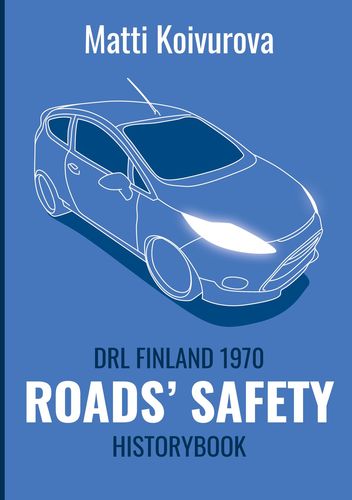 Lue lisää
Kuvaus
History of road transport, history of security. Road traffic affects us all. Security should therefore be of interest to everyone. Basically, everyone wants to live. Traffic has been and still considered dangerous, even though the roads are much safer than before.
Security thinking is reasonably young. In the 1960s, it was difficult to get speed limits. Road deaths increased as the number of cars increased. Development was considered inevitable.
Seat belts were imposed on the front seats of passenger cars, but use remained voluntary. Safety thinking began to evolve, in less than five years in the late 1970s the use of seat belts became mandatory in almost all countries.
The first regulations on the daytime use of headlights were issued in Finland and it happened in 1970. Now, five decades later, the daytime running lights come on automatically when you start driving.
The use of helmets by motorcyclists and moped riders was very low in the 1950s, and not very common in the 1960s. The use of a helmet became mandatory in the 1970s for motorcyclists and in the 1980s for moped riders. The use of a cycling helmet began to become more common in the 1990s.
Pedestrians and cyclists used to travel on the same lanes as motor vehicles, in the dark, reflectors were used to reduce the risk. Thousands of kilometers of cycle paths have been made in a few decades, when there were hardly any at all in the 1960s.
Pamphlet. The author also criticizes in the book, so it can be considered a pamphlet in that regard.
Matti Koivurova (b. 1941) is a car engineer at the Helsinki Polytechnic. In his work as a safety engineer, he became particularly familiar with the safety devices of vehicles and pedestrians.
Kirjailija