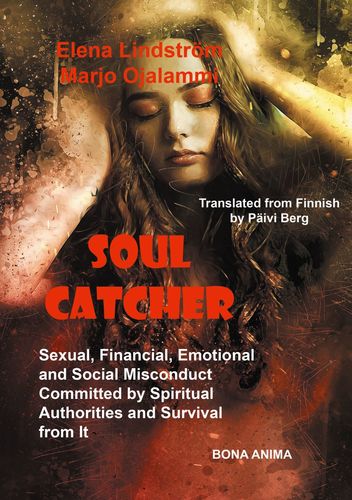 Sexual, Financial,Emotional and Social Misconduct Committed by Spiritual Authorities and Survival from It

Lue lisää
Kuvaus
Soul Catcher consists of Elena's story and its analysis. A non-fiction book on psychic and spiritual misconduct that is very concealed and on which there is little information so far. The book deals with spiritual violence performed by religious leaders towards an adult person. Their authoritarian position can enable versatile abuse, also sexual.

There is no exact term for this phenomenon in Finnish. We use the term kietominen in Finnish edition. Religious and spiritual dimension empowers the abuser to have such control and power, which is not possible in other mental and sexual abuse forms.

Although the victim is an adult, it is very hard for her to recognize the fact that the relationship, she has been driven to, is not one of love and companionship between two equals. Kietominen (or seduction) works mainly in the same way as grooming: a manipulative process performed by an adult as a preparation for the sexual abuse of a child. An adult person is carefully and skilfully manipulated in spiritual context.
Kirjailija

Marjo Ojalammi has a Master 's degree in Theology and at this time works both as an author and a publisher. She also does therapy counseling in her own enterprise Bona Anima.

Elena Lindström is a writer with a pseudonym who is widely talented, a spouse and a mother who has worked in many arenas of life both as a private entrepreneur and in the public sector. Now she works as a post doctorate researcher at a university in Finland.