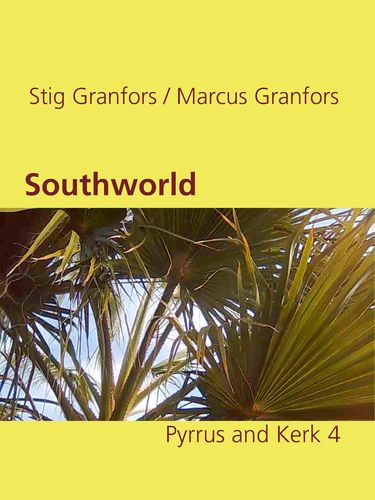 Lue lisää
Kuvaus
Death Planet is eagerly awaiting results from the research journey to the planet Southworld. The task is to search for the gene that creates the violent predator instinct. Southworld has the most life-threatening creatures in the universe, the horror lizards. All attempts to colonize the planet have failed. If the gene can be found and it can be changed perhaps the violent behaviour and aggressiveness can also be limited or completely eliminated in the dangerous and life-threatening plants and animals on Death Planet. Can the small colony be saved? Taking blood from large horror lizards and fast raptors turns out to be no easy task. A sudden natural disaster and a surprising discovery change the whole mission.
This is the fourth novel about the space adventurers Pyrrus and Kerk, whose motto is 'It will get better'.

"The Tyrannosaurus' mouth was filled with about sixty large, serrated teeth that were up to seven inches long. The front teeth were smaller and flatter than the teeth further back, which were thicker and denser. The powerful jaw indicated that this was a predator, which could cause strong bites and crush large bones. For the Tyrannosaurus, Kerk and Pyrrus were just small mouthfuls."

"With silent, stealthy steps, the raptors surrounded the large beast. A low guttural sound was the signal to move closer. The sound made the big beast stretch and look out into the darkness. The beast roared as it noticed the small shadows approaching. It wasn't exactly an angry roar. It was more of a roar filled with fear and anxiety."

"A tribute to Harry Harrison and his Stainless Steel Rat."
Kirjailija