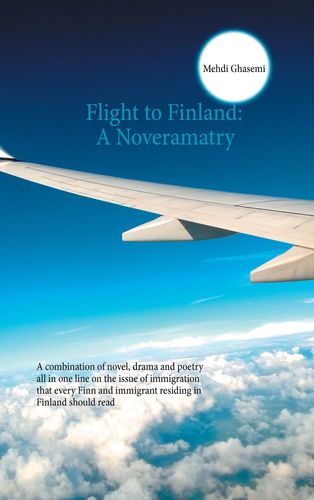 Flight to Finland: A Noveramatry

A combination of novel, drama and poetry all in one line on the issue of immigration that every Finn and immigrant residing in Finland should read

Lue lisää
Kuvaus
Flight to Finland: A Noveramatry is a combination of novel, drama and poetry all in one line on the issue of immigration to Finland. The work starts with the narrator's doctoral defense session and his or her lectio when he or she addresses custos, opponent and audiences and ends with the concluding remark of the custos and in between the narrator moves back and forth to recount his or her narratives of living and studying in Finland while every now and then he or she answers the opponent's questions. The author has also employed some characters from different eras of Finnish culture and history, including The First Woman Voter, The First Finnish Immigrant, The Finnish Refugee, King Charles Frederick, The Finnish Finn and The Swedish Finn, etc., to recount their chronicles. The language is mainly English but the author uses some Finnish, Swedish and German based on the backgrounds of characters.
The book should be read by all Finns, especially by those who serve in the government such as cabinet ministers, members of parliament, politicians, etc., as well as all immigrants residing in Finland. It helps Finns to see themselves from a different perspective and offers immigrants a review of Finnish culture and history along with five year experience of living in Finland.
Kirjailija

Mehdi Ghasemi is a postdoctoral researcher at the University of Turku, the University of Tampere and the Finnish Literature Society. One of his postdoctoral projects, entitled "Toward a More Inclusive Finnish Literature," aims to increase the visibility, readability and research on immigrant authors residing in Finland and authors of Finnish origin living in North America. In parallel, Ghasemi has written fiction in the hybrid genre of noveramatry, which is a combination of novel, drama and poetry all in one line. He has already published three fiction books, entitled Flight to Finland: A Noveramatry, How I Became a W Finn: A Noveramatry and Finnish Russian Border Blurred: A Noveramatry. The forth one, entitled A Farewell to the Earth and Kepler-438b: A Noveramatry, is forthcoming.